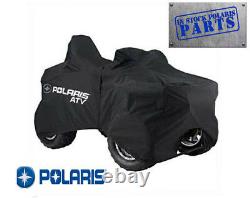 100% Authentic - Genuine Polaris NEW OEM. Polaris Trailerable Cover Black 2877999 New OEM. Protect your Sportsman with this Trailerable Cover. This durable, rugged black cover fits snugly over the ATV to provide full coverage of the vehicle, right down to the wheels and tires.

This cover is so strong and fits so well that it can be used on the ATV during trailering, and it is also ideal for protecting the vehicle from dust and elements such as rain, sleet and snow when the Sportsman is parked. It features the Polaris ATV logo and is open at the front and rear to accommodate tie-down straps. SHIPS NEXT DAY IF ORDERED AFTER THAT DAY.